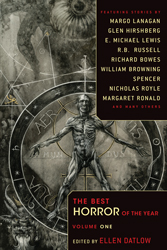 Earlier today, the contents for Night Shade Book’s Best Horror of the Year 1 was listed on editor Ellen Datlow’s blog. The following stories from semiprozines were selected:

It is said by some that semiprozines are publishing some of the best new writers. Who are the authors people should be on the lookout for?

The Albedo One authors who have impressed me most in recent times are Philip Raines & Harvey Welles, Colin Harvey, Nina Allan, Julian West, Will McIntosh and David D. Levine (his story in Albedo One is far better than his Hugo winner). I have also been mightily impressed with Dutch author Teis Teng but unfortunately most of his work is in Dutch. You can find some of his work in English in a collection from Babel Books called Systems of Romance (he wrote half the stories). Modesty forbids mention of my editorial colleagues.

A year or so ago I would have called out Aliette de Bodard — but she’s already well on her way, and is a Campbell nominee this year. I think she’s right at the beginning of a great career.

If I can call out a few artists, too: Chrissy Ellsworth, Sandro Castelli, Aunia Kahn, and Carrie Ann Baade are amazing.

There are some great ones out there. Maurice Broaddus is a terrific writer who I don’t think the Big Three have published yet, but are bound to discover at some point. Aliette de Bodard is popping up in a lot of places, and has been nominated for the 2009 Campbell award. Oh, and keep an eye on multiple-workshop grad Larry Hodges, who is finally getting around to sending out more of his work.

Where to start? Fantasy Magazine has a lot of new, exciting talent, between what was published last year and this year, or soon to be published: Camille Alexa, Erik Amundsen, Stephanie Campisi, Becca De La Rosa, Willow Fagan, Berrien Henderson, Darja Malcolm-Clarke, Gord Sellar, Rachel Swirsky, Genevieve Valentine, and many more. However, the field is full of new authors being published all over, and the zines listed on this website are a great start for a reader to dive right into!

I think there are lots of very good neo-pro short story writers being published these days in semiprozines.  Beneath Ceaseless Skies has published a number of up-and-coming writers who’ve been Finalists or Winners of the Writers of the Future award, including Tina Connolly, Sarah L. Edwards, and Erin Cashier.  Our stories from other newcomers such as Matthew David Surridge and Grace Seybold have also received strong reviews.  And we’ve published two authors who are nominees for this year’s Campbell Award for Best New Writer–Tony Pi and Aliette de Bodard.

The winners will announced at Anticipation, the 67th World Science Fiction Convention, the week of August 6-10, 2009, in Montréal.

The storySouth Million Writers Award is an annual award that recognizes the best online fiction regardless of genre. The list of Notable Stories of 2008 has been posted and the final ballot of ten will be posted on May 15th.

The following notable stories from semiprozines are available free for your reading pleasure:

Beneath Ceaseless Skies was also singled out as runner up in the Best New Online Magazine category.

The third volume of Jonathan Strahan’s Best Science Fiction and Fantasy of the Year is scheduled to be published soon. It includes the following stories selected from semiprozines:

The following stories from semiprozines have been selected by Rich Horton for his 2009 year’s best collections:

Overview:
Our mission is to publish the finest in speculative and imaginative fiction and poetry, with special attention to character-driven stories that examine the depths and heights of emotion and motivation from a broad variety of cultural and social perspectives. We want to publish powerful stories with emotion that resonates in our minds and hearts long after the first reading and makes us want to read them again and again. We look for the unique: stories that stand out in a genre that pushes the envelope of unusual. We take special delight in detailed world-building, and we enjoy reading about the realms and inhabitants of your imagination.

We have no subject/topic preference, beyond a requirement that the work have a speculative element. We are happy to read high fantasy, magic realism, hard science fiction, sword and sorcery, and genre-bending stories that don’t quite seem to fit elsewhere. Our tastes span the gamut from classic Golden-Age SF to modern nontraditional formats.

Tony Pi’s “Metamorphoses In Amber” was on the ballot for the 2008 Prix Aurora Award. “Snatch Me another” by Mercurio D. Rivera featured on the 2008 Locus and SFWA Recommended reading lists. There are three Rhysling Award nominations for A&A poems in 2008 (voting not final). In 2005, Greg Beatty won the Rhysling Award for his poem “No Ruined Lunar City” and took third place in the Dwarf Stars Poetry Award for “Prayer Causes Stars“.

Other Items of Interest:
On April 22, 2009 we will be releasing THE BEST OF A&A VOLUME ONE, Edited by Wendy S. Delmater, published by Hadley Rille Books. 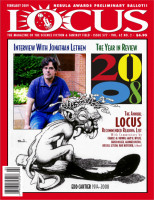 The Locus Magazine Recommended Reading list is published annually in their February issue and represents a consensus view by Locus editors and reviewers.

The following 2008 novelettes and short stories were selected from the pages of semiprozines:

The table of contents for David G. Hartwell and Kathryn Cramer’s  Year’s Best SF 14 (EOS) and Year’s Best Fantasy 9 (Tor.com) have been released. The following stories were originally published in semiprozines: