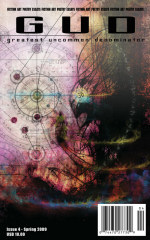 Overview:
GUD (pronounced “good”) is a print/pdf magazine with two hundred pages of literary and genre fiction, poetry, art, and articles. Modern in business, method, and execution, but timeless in message, GUD is published twice a year, for your reading pleasure.

GUD is FOR THE WRITER or ARTIST. A simple submission process, and the potential to earn royalties. Our issues never go out of print.

GUD is FOR THE READER. We print the best of the best. Our business model is built for artists and consumers, not for ourselves. And GUD is flexible—buy the whole magazine or a single .pdf of the story, poem, artwork, or article you just have to have.

Other Items of Interest:
We publish reviews of books and magazines on our site.

Overview:
LCRW is a paperzine — although we’ve been selling ebooks (on our site and fictionwise.com) for a couple of years now. We’re also going to go back and release the back issues as ebooks in the near future (i.e. when Fictionwise catches up with its submissions!).

When I started the zine, it was in frustration at not being able to find the kinds of things I wanted to read. This isn’t true any more, but as long as we get great stuff in the mail, we’ll keep publishing.

Small Beer Press publishes 4-6 books a year but it’s fun to keep things simple with LCRW. It basically pays for itself, no small feat for a magazine of any size. We do black and white covers and legal sized paper because it’s affordable and a good page size.

Awards and Recognition:
LCRW was a Hugo nominee a couple of years ago, that was fun. Various stories have been reprinted in various year’s best anthologies.

Other Items of Interest:
I suppose the most interesting part would be that, if you like, you can get a chocolate bar with each issue. (That’s one part of the zine we’d love more submissions for.) 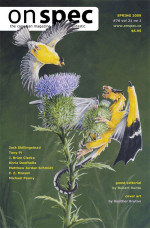 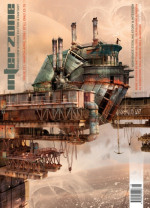 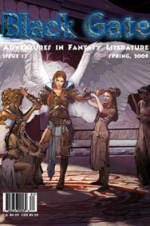 Overview:
Black Gate publishes epic fantasy fiction at all lengths, including novel excerpts, as well as articles, and reviews. We’re looking for adventure-oriented fantasy fiction suitable for all ages, as long as it is well-written and original.

The magazine publishes all kinds of fantasy. Nobody wants to open up a magazine, especially a big magazine like Black Gate at 224 pages, and read only one kind of fantasy, so we try to cover everything. Do we have a focus? Yes – about 70% of what we publish is adventure-oriented fantasy. Does that mean a lot of sword fights in fantasy? No. It means that we’re looking for stories with a lot of dramatic tension. A good, rousing climax. Something based on the basic rules set down by Aristotle two thousand years ago, the three acts of drama. You’ve got to have an introduction, introduce your characters. You’ve got to get your characters to a point where your audience is convinced they cannot succeed. And then they have to succeed.

We want fiction with a more exotic setting. Most of what we see has a very familiar setting. Generic Middle Ages. It starts off in a tavern with a ranger and a bard and a half-orc having a conversation. I want more originality than that. You need to grab the reader on the very first page. It’s tough to do that with character, because character needs to be developed. It’s tough to do that with plot, because any plot that’s simple enough to grab me on the first page probably isn’t complex enough to maintain my attention. It’s easy to with the setting. If you’ve got an innovative, dynamic setting, then you’ve got my attention on the first page. You’ve got my reader’s attention, and that works.

Awards and Recognition:
“Awakening” by Judith Berman was nominated for the Nebula and several stories have been reprinted in Year’s Best anthologies. 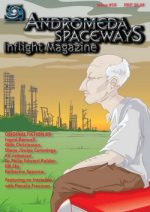 Editors: Robbie Matthews: Senior Editor. Editorship for each issue is rotated among members of the Andromeda Spaceways Publishing Co-op.

Overview:
ASIM’s mission is to support Australian speculative fiction, and to provide a venue for stories that sample the ‘lighter side’ of specfic. Although we’re an Australian magazine, we have subscribers worldwide (well, almost worldwide: we’re still struggling to crack the lucrative Antarctic market) and our authors are also scattered far and wide. A typical ASIM issue (if there is any such thing) will contain roughly equal quantities of stories by local and international authors, ranging from frivolous space opera to grim and gritty dark fantasy. We’re available in both print and PDF editions, and publish bimonthly. We’re a paying market, offering 1.25 Australian cents per word. And we’re justifiably proud of the reputation our slush-handling system has achieved – doing right by our authors, whether their stories make it into the magazine or not, is something we’ve worked damn hard at.

Awards and Recognition:
The three-hundred-odd stories published to date in ASIM have accrued the following awards between them: